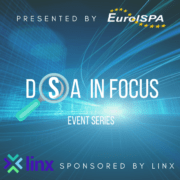 On 7 April 2021 EuroISPA hosted its first online event in the DSA in Focus series, which examined the new provisions in the Digital Services Act (DSA) aiming to improve the management of illegal content online.

The event, kindly sponsored by LINX, gathered an exceptional expert panel, including MEP Dita Charanzová, shadow rapporteur on the DSA report in IMCO, MEP Henna Virkkunen, rapporteur for the ITRE opinion on the DSA, Malcolm Hutty, Chair of EuroISPA’s Intermediary Liability Committee, as well as Iverna McGowan, Director at the Centre for Democracy and Technology. EuroISPA’s President Alexandra Laffitte moderated the panel.

Describing the “perfect” notice and action system, MEP Charanzová focused on the importance of finding the right balance between the ability of users to share content freely and the necessity to remove illegal content online. She stressed that the “proposal of the European Commission is a good starting point, but that details will need to be addressed by the co-legislators”.

MEP Virkkunen agreed on the necessity of striking the right balance between various interests, and stated that, as a general rule, “the same rules should apply online and offline”. At the same time, she insisted that “it is crucial for the European industry to avoid overregulation”.

Iverna McGowan focused on the human rights law perspective, and argued that “the legality of our speech must be decided by the courts”. She argued that an effective framework would empower users to flag pieces of speech, without leading to the over-removal of legitimate content and an ensuing chilling effect on free speech.

Malcolm Hutty presented several aspects of EuroISPA’s position on the DSA. He advocated for a system which does not create onerous barriers for businesses yet not created, and which ensures several safeguards which protect users and companies against misuse of notice and action processes.

The expert panel discussion was followed by a stimulating discussion with the participants, focussing on the issues of democracy and the Internet, co-regulation and self-regulation, as well as encryption.

EuroISPA would like to extend its thanks to the speakers for sharing their insights on the new DSA regime and for the open exchange with the audience. We look forward to our second event, which will take place in May, and which will focus on further aspects of the DSA, such as the Know Your Business Customer obligations and the provisions on Trusted Flaggers.

For further information on the upcoming events visit our dedicated webpage on euroispa.org/dsa-in-focus.

EuroISPA shares its views on the Digital Services Act