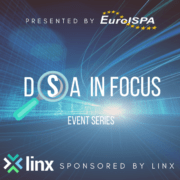 On 29 September 2021, EuroISPA presented the fourth online event of its DSA in Focus series, sponsored by LINX. This time, the event focused on the DSA articles on the limited exemption from secondary liability for intermediary services, due diligence, own-initiative investigations and general monitoring provisions. You can revisit the interventions of our speakers here or below.

The event gathered a distinguished expert panel debating the objectives of these measures, the practical challenges for implementation and possible ways forward. It was formed by MEP Patrick Breyer, Rapporteur for the LIBE Opinion on the DSA, Dr. Christina Angelopoulos, Lecturer in Intellectual Property Law at the University of Cambridge, Catherine Garcia-van Hoogstraten, Director Responsible Technology Policy, EU Government Affairs at Microsoft, as well as Malcolm Hutty, Chair of EuroISPA’s Intermediary Liability Committee.

EuroISPA’s President, Alexandra Laffitte, moderated the panel. In her introductory remarks, she emphasized that EuroISPA has been advocating for over 20 years in favour of the limited exemption from secondary liability established in the E-Commerce Directive.

MEP Patrick Breyer shared his opinion on the European Commission’s proposal on the DSA, providing for a limited exemption from secondary liability for mere conduit, caching, and hosting service providers. He argued that there is consensus that these provisions are working well and adding new categories would constitute a risk. Moreover, with regards to the own-initiative investigations of intermediaries, he stressed that law enforcement should be kept in the hands of judicial independent authorities, rather than private actors.

Dr. Christina Angelopoulos agreed with MEP Patrick Breyer and insisted that intermediaries are not duty bearers. Besides, she stated that the European Parliament should not move away from the horizontal approach of the European Commission on sector-specific legislation.

Catherine Garcia-van Hoogstraten argued that online service providers should be able to proactively take down illegal content with appropriate tools. Besides, she agreed with preserving the current categorization of the European Commission’s proposal on the DSA.

Malcolm Hutty also welcomed the horizontal approach of the European Commission. Commenting on amendments which created primary liability for intermediaries, he pointed out that this would be unproportionate and lead to over removal of legitimate content. Furthermore, he stressed the need for strict rules against requiring general monitoring.

The panel discussion was followed by an open Q&A session, where participants had the opportunity to exchange with our speakers on these issues.

EuroISPA wishes to extend its gratitude to the speakers for sharing their knowledge on the new DSA regime and for the open exchange with the audience. We are looking forward to our fifth event, taking place by the end of October, which will focus on the implementation, the extraterritorial effect, and enforcement of the DSA.

DSA in Focus: Liability of Intermediaries