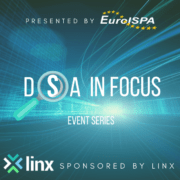 On 2 December 2021, EuroISPA presented the fifth online event of its DSA in Focus series, sponsored by LINX. This time, the event focused on the DSA’s provisions on the country-of-origin principle, extra-territorial jurisdiction and the Digital Services Coordinators. You can revisit the interventions of our speakers here or below.

The event gathered a distinguished expert panel debating the implementation, the extra-territorial application and the enforcement of the DSA. It was formed by Michał Pukaluk, Director of the Digital Policy Department in the Office of the Polish Prime Minister, Christian Dawson, Executive Director with the i2Coalition, as well as Malcolm Hutty, Chair of EuroISPA’s Intermediary Liability Committee.

Thomas Bihlmayer, Member of the Board of EuroISPA, moderated the panel. In his introductory remarks, he emphasized EuroISPA’s support for increased harmonisation of procedures to tackle illegal content across the EU, in order to ensure legal certainty for businesses and a safe environment for users online.

Michał Pukaluk mentioned that, while the country-of-origin principle needs to be preserved, it will be important to ensure the involvement of the country of destination in the enforcement. Besides, he stated that during the negotiations in the Council, the basic exemptions for SMEs were maintained. Moreover, he expressed his satisfaction with the fact that the DSA is ensuring that illegal content is treated equally offline and online.

Malcolm Hutty stated that EuroISPA is supportive of the Commission’s attempt to balance the text and welcomes its broad, cross-cutting and horizontal perspective. Besides, he argued that the country-of-origin principle needs to be respected to ensure EU principles.

EuroISPA wishes to extend its gratitude to the speakers for sharing their knowledge on the new DSA regime and for the open exchange with the audience. We are looking forward to our final event, taking place on Wednesday, 26 January 2022, wrapping up the series.